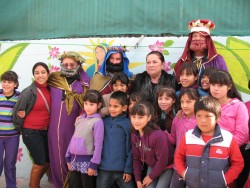 As part of St. Paul’s Cathedral and the Episcopal Diocese of San Diego’s tradition for over five years, the Three Kings, Tres Reyes, visited the foster children, staff and neighbors of Dorcas House on Sunday, January 6.

The Three Kings processed during the 10:30 a.m. service and were given a blessing by the Rev. Canon Joan Butler Ford. Immediately afterwards along with other members from Good Samaritan, University City; Christ Church, Coronado; St Bartholomew’s, Poway and St Peter’s, Del Mar, they traveled to Dorcas House in Tijuana, Mexico.

Upon everyone’s arrival, time was spent with the children, staff and guests; lunch was shared with all and then the family groups received their gifts from the Three Kings. Photos were taken which serve as momentos for the families, which they will cherish.

This tradition of celebrating the Three Kings day is very much alive in many cultures as in Mexico. Those of us from the Episcopal Diocese of San Diego are honored to share and participate with our friends at Dorcas House. For future trips to Dorcas House in 2013, watch for announcements on www.stpaulcathedral.org or www.dorcashousefriends.org.

Light Up the Cathedral

The Light Up the Cathedral Service has its roots in outreach, but it has become a beacon of hope, love, and interfaith inclusivity. This year, you can join the LGBTQ+ community and faith leaders from throughout San Diego on July 13th for Light Up the Cathedral and begin your Pride week in worship and love.    […]

Have you ever had one of those long, busy days when you fall into bed that night, stopping for what feels like the first time in 12 hours, and find yourself wondering, “What did I get done today?” It happens to many of us. The chaos of ordinary life takes the helm, and you find […]