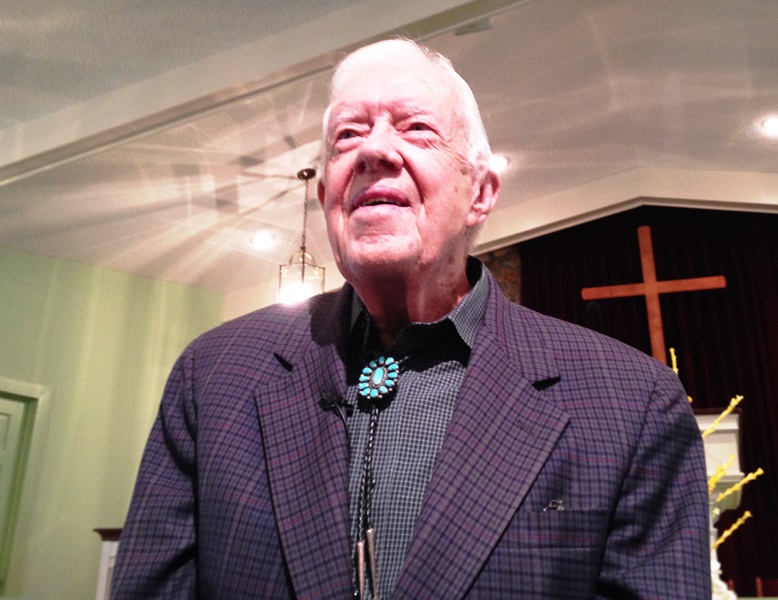 “He is probably the only President to give a Bible study in the White House.  He is the only ex-President to give Bible studies.”  So said Jan, the church volunteer who led the 9:00 am orientation before Jimmy Carter’s Sunday School class on June 5 at Maranatha Baptist Church, Plains, Georgia.  Ann and I arrived at 5:50 am, chatted with other visitors, went through security just before 9:00 am, and sat in the front row beside the only people to arrive before we did.  Just before 10am, President Carter entered.  At 91, his cancer currently undetected, he looked fit.  Smiling and soft-spoken, Mr. Carter greeted all and asked where we were from.  We were from about 25 states from Alaska to Florida, from Massachusetts to California — and from Brazil, India, Kenya, Nepal, Romania, and South Africa.   Next President Carter asked for a show of hands by missionaries and pastors, active or retired.  Prompted, I said: “Episcopal.  California.  Retired.”  He said, smiling broadly, “I’m retired, too.”  Mr. Carter noted that he has been teaching at Emory University for over 30 years before choosing another of the three pastors present, an Emory University professor, to give the opening prayer.

Next President Carter spoke of Carter Institute goals: achieving peace and ending the death penalty.  He asked if any were opposed to Palestinian-Israeli peace.  No one so indicated.  Then he said that he knew many would disagree with him on abolishing the death penalty.  He continued, speaking of the execution process, reporting that, for example, it costs over 33 million dollars per execution in California.  He also spoke of the large number of convictions overturned through DNA testing and the disproportionately high number of black people convicted.

Then President Carter turned to Jesus’ encounter with a Samaritan woman at the well in Sychar (John 4).   Jesus and his disciples were en route from the Judea to Galilee.  He reviewed the origins of the enmity between Samaritans and Jews and noted that most Jews took the long way around to avoid Samaria.  President Carter enumerated the boundaries Jesus crossed at the well: a Jew speaking to a Samaritan and a Jewish man speaking to a woman not a member of his family.  Moreover, he asked her for a drink of water.  Mr. Carter commented on the woman’s rapid grasp of what Jesus meant by “living water” and her becoming the “first evangelist” when she went into town witnessing to Jesus.  Mr. Carter compared the boundaries violations at the well to experiences from his early years in the fields of Plains.  With sadness, he recalled separate water buckets and ladles for black and for white field workers.

Mr. Carter offered a prayer at the conclusion of his class.  Shortly, Mrs. Carter joined him in a side pew for Maranatha members.   Worship began at 11 am.  Pastor Jeremy Shoulta preached insightfully and many fine Baptist hymns were sung.  Following a photo with the Carters, we left after a long and most worthwhile morning.