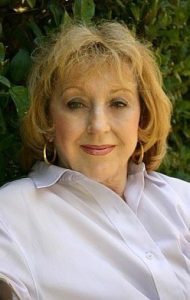 Sallye Ann Graves, loving wife, mom, grandmother and great-grandmother, passed away peacefully on June 7, 2016 in San Diego, California at the age of 88.  Wife of the late Rev. Gerald H. Graves, former Rector of Saint John’s Episcopal Church in Chula Vista, CA, Sallye’s life passions included her love of family and friends, dedication to her church, music and performing arts, and serving as a rescue volunteer for homeless animals.

Born January 31, 1928 in Asheville, North Carolina, Sallye’s musical talents emerged at the early age of 14 through studying piano, singing, and eventually performing with her mother, late vocalist and entertainer Theresa Grimes, on multiple radio outlets from New York City to the Midwest. Sallye graduated from The University of Tulsa, Oklahoma in 1950 with a B.A. in Fine Arts and as a Sister of the Kappa Delta Sorority and member of the Theta Alpha Phi National Honorary Dramatic Fraternity. She returned to New York City, where she performed professionally and was offered a contract to tour with famed bandleader and radio-television personality Fred Waring and his orchestra. She instead accepted the marriage proposal of Gerald Holmes Graves of Tulsa, Oklahoma, eventually relocating to Berkeley, California where her new husband attended Episcopal Seminary, and where they began their new family.

Over the years, Sallye served as a devoted parish wife at her husband’s California Episcopal parishes, including St. Mark’s (Altadena), Church of the Ascension (Tujunga), St. Columba’s (Camarillo), and finally St. John’s (Chula Vista), all the while maintaining a career in music and performing arts. In later years, Sallye and husband Father Jerry traveled to Great Britain on multiple occasions to tour various Anglican and Episcopal churches and cathedrals, and once took part in a parish exchange program with a British priest and his family, giving each other the opportunity to experience the other’s parish for several weeks.

During the 1960s, Sallye trained with Los Angeles voice teacher and mentor Jack Metz, becoming especially active in theater productions throughout Ventura County and landing lead roles in musical theater productions including ‘The Sound of Music’ (a production featuring her husband and all four children in key speaking/singing roles); ‘My Fair Lady’, ‘The Mikado’, ‘Oklahoma’, ‘The Desert Song’, ‘Madame Butterfly’, and ‘Pirates of Penzance’. Upon relocation to the San Diego area in 1970, Sallye joined the San Diego Opera and spent nearly a decade as a featured singer of opera and musical theater at the original Mario’s Restaurant in downtown San Diego. In later years, Sallye continued to perform professionally, while remaining a faithful parishioner and member of Saint John’s Episcopal Church choir in Chula Vista through her final days.

In the 1990s Sallye emerged as a strong advocate for animal rights, working with other animal rights volunteers to persuade city officials to build a new and improved Chula Vista Animal Care Facility and helping to place hundreds of homeless dogs and cats in homes throughout San Diego County.  Two of Sallye’s rescues that she adopted to be her own –Buster Brown and Sami – remain living with her family.

The family is being served by Legacy Funeral and Cremation Care in La Mesa, CA. Memories and on-line condolences may be shared with the family at www.legacyfuneralcare.com.