Lesslie Keller, CEO of Episcopal Community Services (ECS), has announced that she will retire at the end of 2020 after 13 years of diligent service. Since March of 2007, Lesslie Keller has led ECS through some of the most challenging times for our society, and especially for those on the margins. The need for human and health services ballooned over the last 13 years. Servicing those struggling with homelessness, mental health and substance abuse, and supporting early childhood education is not only ECS’ call to mission but also Keller’s spiritual center—seeing and serving Christ in others. “Seeing the Christian life lived-out—watching the loving our neighbors as ourselves—being able to walk-the-talk through ECS’s programs and staff has been a privilege,” said Keller. 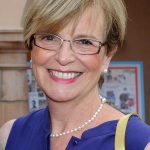 “I am full of gratitude to have been a part of ECS,” said Keller. “The chance to serve our community by providing life-changing services to thousands has been the opportunity of a lifetime. I am proud of the work we have done together, and I am filled with optimism about the agency’s future because I know the talent, dedication, and leadership that exist here. When you find the place where your deep gladness and the world’s hunger intersect, no matter how difficult the task, it is worth doing. I have been very blessed to have had an opportunity to work in that intersection,” said Keller.

Keller has been the CEO of ECS since March 2007 when she moved from Chicago to San Diego. ECS has grown to a $30 million organization serving more than 6,000 people every year under her leadership.

“Lesslie’s vision for bringing help to those who need it, coupled with her incredible organizational, leadership, and financial skills, have developed ECS into a mighty instrument of healing and growth in the people of our wider community. We will miss Lesslie greatly, but I know that because of her leadership, ECS is well-positioned for the coming years,” said the Rt. Rev. Susan Brown Snook, Fifth Bishop of the Episcopal Diocese of San Diego.

Under Keller’s stewardship, San Diego County granted ECS a new contract to provide substance use/disorder treatment services to adults and transition-age youth–leading to the formation of the ECS Central East Regional Recovery Center (CERRC) which has nearly quadrupled in size since its start in 2017.

Last year, the ECS ACCORD DUI program was selected by the State of California to participate in the DUI Medication-Assisted Treatment Integration/Outreach Pilot Project. Now ECS screens clients for additional substance use disorders and links them to further services to reduce opioid overdoses and opioid-related traffic fatalities.

Keller also helped expand the organization’s Para Las Familias program that provides bilingual behavioral health services to children age five and under in the South Bay; a program that has grown from a small office to serving nearly 250 children and their families every year.

Under Keller’s care, the ECS Head Start program remains one of the largest Head Start and Early Head Start services in the South Bay area of San Diego, increasing the number of children served by nearly 25 percent since 2007 and last year added State Preschool for 128 children.

The Rt. Rev. James Mathes, Fourth Bishop of the Episcopal Diocese of San Diego, said, “I have had the privilege of knowing and working with Lesslie for 25 years. She had the courage to come to ECS at a moment of profound challenge for the agency. And she blessed us with her amazing skills and dogged determination. She made ECS strong; she made our community a better place. Because of her ministry, countless lives have been blessed and transformed.  As she retires, I join our bishop and others in saying, “Well done, good and faithful servant.”

Working in public services is difficult, but there is an army of people who work unselfishly for the community good. “It is amazing,” said Keller, “Volunteer and observe these organizations in action!” Many of the volunteers and employees that work in social services come from lived experience—people that have been in really gritty situations. These shared experiences create an environment of understanding, perspective, and safety for ECS clients.

Keller told Authority Magazine about how an early meeting with an ECS client changed her perspective, “An early encounter I had with a mentally ill, homeless man left me with an experience I will never forget.  When I welcomed him to a Thanksgiving luncheon we were serving, he yelled and cursed at me and accused me of hating him and said he would be leaving to go and get drunk. Taken aback, I assured him that I did not hate him and that he was welcome at our outreach program.  Over the course of the next hour, I had another similar encounter with the same man who was obviously agitated and hostile.  He was every bit the stereotype of a scary street person. But to my surprise, our last encounter was very different. When I offered him a piece of pie, he took my hand in his and met my gaze, and we had a very civil conversation in which he apologized for his earlier behavior and thanked me for affirming him. I realized at that moment that he was likely more frightened of me than I was of him, and the defenses that were necessary for him to survive on the street initially prevented us from connecting. I had to get past my own stereotype of him as he did of me.  It was deeply moving to me to be able to break through those defenses, to really see and connect with a human being whose life experience was so different from my own. The staff assured me later than he was a complete teetotaler and never got drunk! I saw people in his situation differently after that.”

“We all have something to offer when the world needs help,” said Keller.