The Church of the Border

The San Diego Organizing Project (SDOP) hosted an interfaith gathering at Our Lady of Mount Carmel Catholic Church in San Ysidro on Sunday, September 20 at 3 p.m. On the eve of Pope Francis’ historic visit to the US, this event celebrated his visit even while probing the meaning of his social teachings for the US-Mexico border. The Rt. Rev. James R. Mathes, bishop of the Episcopal Diocese of San Diego, quoted the famous sonnet engraved on the Statue of Liberty containing the lines, “. . . Give me your tired, your poor,/ Your huddled masses yearning to breathe free.” He urged those gathered to take action for immigration reform. 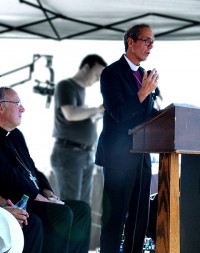 The Rev. Henry Rodriguez of St. Jude’s Shrine, and one of the main organizers of the event, called this moment in history a time of lamentation, challenge and hope. He poised this question to the hundreds of church-goers in attendance: Who is the church in this moment? Against the backdrop of the Tijuana mountains, he asked: Who is the church in this place? He lamented the fact that at worst, politicians aiming for the White House cast undocumented brothers and sisters as invisible at best and as cheats, liars and criminals at worst. He urged the gathering to consider what “we, the church of the border, have to say in this moment” and what “we, the church of the border are willing to do.”

The Reverend Kathleen Owens, lead minister of the First Unitarian Universalist Church of San Diego, pointed out that the “broken, abusive system” does not benefit anyone, even those who think they benefit from it. She said that our challenge “is to find ways to show how this broken system, how racist thinking and actions, hurt everyone.” She had hope that the “soul damage” would heal one day because “there is something, someone larger at work than just ourselves.” Her hopeful message concluded with a vision of reunited families and the “betterment of all.”

Bishop George McKinney, co-founder of the SDOP, and founder of St. Stephen’s Cathedral Church of God in Christ, said that “the black and the brown are bound together.” He spoke about the need for empathy and compassion as we reach across racial lines to solve the immigration crisis together.

Two young women, Theresa Flores and Paulina Morales, spoke about their experiences of having family members deported after decades of residing, working, and paying taxes in the US. They spoke of the harm to their family as a whole and the disadvantage that the younger children experience through single parenting, as well as the stress on the older children who must shoulder adult responsibilities while still in their teens.

Newly installed Catholic bishop, the Rt. Rev. Robert McElroy, unveiled and blessed a new memorial wall dedicated to families torn apart by unjust immigration laws. In light of the political grandstanding in the current pre-election year, the Catholic bishop reminded the crowd that we are nation of immigrants, and that the members of the holy family were undocumented migrants in the land of Egypt.

Bishop McElroy implored the crowd to wrestle with the fact that Pope Francis has called the church, “the church of the poor for the poor.” As Bishop McElroy unveiled and blessed the memorial wall, the crowd placed wooden crosses symbolizing all those harmed by the current immigration system in the chain link fence, through which the hills of Tijuana glistened and an enormous Mexican flag waved in the breeze. 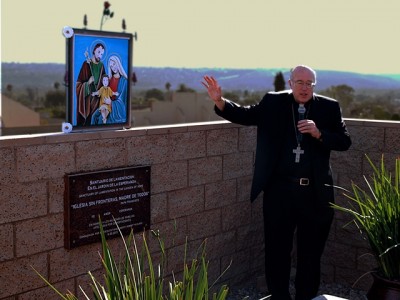 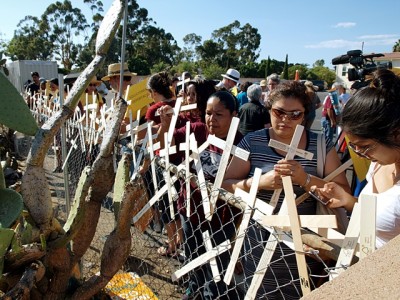 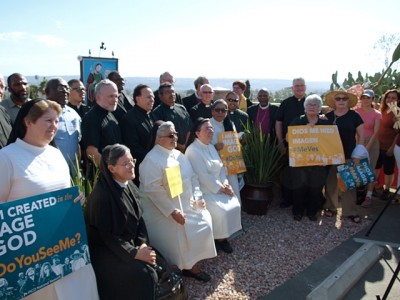 Clergy of many faiths joined together to make this statement for immigration reform. Photo: SDOP/Jeremy Kaercher