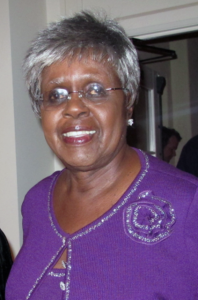 Growing up in a lower-middle-class Jamaican family, I was taught that education was my ticket to a better life. My first step was an elementary school surrounded by sugarcane fields where uneducated women worked long hours for little pay. I learned to devote time and effort to learning or I, too, would be walking behind the machines, gathering up the canes. In true British tradition, high school education was not free and I needed to study to get high marks on the 11+ exam and get a scholarship to the Anglican High School for girls.

The next step loomed bright before me. The University College accepted its first class when I was a sophomore in high school! After working for three years in a daycare center, I was recruited into the charter class of the university’s new program in social work. By that time I had learned two things: with hard work I could make it, but I also needed to give back by identifying those who needed help finding the staircase.

I graduated from the social work program and became a social caseworker in the Kingston slums. I learned to give ‘til it hurts: to identify the child who, with love, support, and encouragement could find the first step on the staircase leading to places yet unknown. This was a happy time in my life. I was making a difference in the lives of many, helping them dream of community leadership roles.

The call to education and continued learning persisted despite the real absence of resources. I filled my time volunteering as a data collector for faculty mentors and discovered that I loved research. In the course of data collection, I was able to touch the lives of many and I discovered that I could be an example of what could be attained with hard work. When I was offered partial support to attend UCLA, I grasped the opportunity without a clear goal beyond a longing for more education. More education and training would equip me to better serve wherever I may be. A Ph.D. was perhaps in the distant future. Leaving Jamaica, I realized I would sorely miss my parish church, my rector, and the adults who had guided me along my path to young adulthood.

As for spiritual formation, church had always been an important part of my life. Born to an Anglican mother, I was baptized as an infant, attended Sunday school, was confirmed at 12, sang in the choir and joined Daughters of the King (DOK) as a young woman. My church was the focus of my life outside of school. My close friends were there: we went to the same schools and lived within striking distance of each other. But they lived with both parents. We subsisted on my mother’s income as a school teacher, as my father died when I was eight-years-old. There was little left over for extra-curricular activities. My church community remained the center of my life. I volunteered teaching reading and assisting high schoolers with homework.

It turned out that replacing my church community proved to be easier than I anticipated when I arrived in Los Angeles. St Alban’s, Westwood was home for all foreign Anglicans, mainly Africans and West Indians, who were attending UCLA along with many Episcopal, African-American staff. Sundays at 5 p.m. we celebrated the Eucharist. We had suppers, often prepared by members of the group, and learned about the minimal differences
between the American church and the Anglican churches in the colonies. I settled comfortably into the graduate student community at St Alban’s. I am thankful for the ease with which I was able to make the shift from the Church of the West Indies in Jamaica to the Episcopal Church. I have since experienced the joy of attending the Eucharist in Africa and South America. The ability to settle into a comfortable routine and fully participate in worship was food for my soul.

The shift to the American education system was not as easy, as there were more requirements even at the graduate level, some imposed by the state of California. In order to make sense of this unfamiliar terrain, I set out to learn all I could about the California master plan for education. Little did I know that the time invested in learning about California, and by extension, the U.S., would become a major source of knowledge and understanding about the role of education in society.

As I progressed up the education staircase, I discovered that I like to teach, and that teaching, like learning, happens in the most unlikely
places, and continuously. Receiving a Danforth Fellowship, a fellowship designated for individuals committed to teaching careers, was an answer
to my prayers! No longer having to work to support myself, I could immerse myself in understanding education systems.

I served in exciting places based on my work in the University of California system, on the integration of the three systems of higher education in the new South Africa, and on plans for the expansion of research universities in the United Arab Emirates. Yet, as exciting as these were, they do not highlight my two staircases, education and spiritual growth and how each enhances the other. I am constantly in search of opportunities for my own growth, and to contribute to the growth and development of others, and to give thanks for my many blessings.

I also learned that perhaps I could give back for the many blessings I had received by seeking out ways to help others negotiate their own education pathways. I will mention three of the many opportunities, for which I have received no financial compensation, but much joy in being able to help these young persons identify the first steps on their staircases.

While living in the San Francisco bay area, I employed a housekeeper with two daughters, ages six and eight. I soon suspected that my housekeeper was a smart woman, and had we both had similar opportunities, support, and prodding she, too, could have been a university administrator. She shared her dreams for her daughters, asking what she could do to make sure they had the opportunity to go to college, but fearing that they were
perhaps doomed by the poor quality of the schools in her neighborhood. After careful research and much prayer I decided that I could enroll them in my neighborhood elementary school and monitor their progress. Some 12 years since that first intervention the eldest graduated from UCSD with a degree in biology four years ago and is now employed by the Spanish ministry of education, teaching English in Bilbao, Spain. The younger will graduate from UCSC next year. This family is still a part of my life, anxious to give back, and grateful for the opportunity to excel, see the world, and give their hardworking mother the satisfaction of experiencing their success. Each has taken advantage of everything their campuses had to offer: participating in the education abroad program, travelling in Europe and spending summers volunteering in Central America.

I currently serve on the board of the diocesan Episcopal Refugee Network (ERN), which assists people brought to the U.S. to escape the turmoil in their own countries. The ERN works with families in many ways, but schooling emerges as a universal need and I find myself working on academic plans, reviewing college applications, editing essays, and immersing myself in high school curricula, and application requirements to guide them
through the process.

I also work with a young Mexican woman, helping her review options for college. I have assisted her in designing an academic program for several semesters. She is now clearly on track to enter college and we are reviewing her options. I have learned from these young people that even when the need for education is recognized as the staircase to upward mobility, absent is the faith that will lead them to first steps. I am grateful to God for the opportunity to serve him by contributing to the growth and development of others, and by helping them to find that first step on the staircase. +

The Bible Challenge Hands on Formation