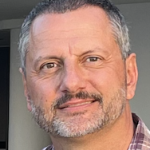 Thanks to a three-year grant from The Episcopal Church’s Office of Global Partnerships, EDSD is glad to welcome a new part-time Border Missioner, Troy Elder. In this role, Troy will coordinate ministry activities in the Diocese of San Diego related to US-Mexico border and migration issues. He will collaborate with diocesan staff, congregations, community ministry partners, other Episcopal Dioceses, and the wider Episcopal Church to discern, create, and enhance ministry related to the border and migration. He will educate Episcopalians in our diocese about border and migration issues and help Episcopalians and congregations engage in border service and advocacy opportunities.

Bishop Susan Brown Snook said, “I am so glad to welcome Troy to our staff. The breadth and depth of his experience and knowledge in border and migration issues will help all Episcopalians in our diocese understand more about our own call to love our neighbors. I look forward to the expanded opportunities for ministry Troy will bring to us, and I am very grateful for the Episcopal Church grant that made this position possible.”

Troy is an attorney, community- and faith-based activist, and former law professor with nearly 25 years of experience representing refugees and immigrants. Speaking Spanish, French, and Haitian Creole, Troy has worked on various aspects of immigrant advocacy at numerous organizations throughout the United States and abroad.   He spent a decade teaching immigration law, poverty law, international human rights, and ethics at U.S. and foreign law schools, most recently at Yale. He also studied liberation theology and colonization as a Henri Nouwen Scholar at Yale Divinity School, receiving a master’s degree in Religious Ethics in 2013.

From 2014 to 2018, Troy served as the Bishop’s Legate for Global Partnership at the Episcopal Diocese of Los Angeles. There, he worked to catalyze clergy and laity around immigrant and human rights issues domestically and abroad, including that diocese’s response to the 2014 child migrant surge. While on the Los Angeles Bishop’s staff, Troy worked with congregations to create worship, educational, service, and advocacy programming in the area of immigrant rights and world mission.

After moving to our Diocese, Troy served as a senior attorney at Immigrant Defenders Law Center in San Diego, Tijuana, and Mexicali, where he supervised systemic and appellate work at the U.S.-Mexico border on behalf of migrants subjected to the Migrant Protection Protocols (MPP), brought COVID decarceration cases in immigrant prisons, and fought border metering and the third-country transit asylum ban. Most recently, along with other Episcopalians, he was a founding member of a new group, Desert Support for Asylum Seekers, which assists migrants on both sides of the border at Calexico, California.

“I am honored to be invited to join this ministry at such an important time,” says Troy. “The Episcopal Diocese of San Diego, from Friendship Park to Yuma County, Arizona, encompasses the hemisphere’s busiest land border crossing and numerous immigrant-rich communities.   At this unprecedented time of forced migration, discerning and heeding God’s call to welcome the stranger–evident from Genesis to the Book of Hebrews and manifest in the cause of Christ–challenges Christians to confront complex questions. With humility and excitement, I look forward to walking together on this road.”

Troy is married to the Rev. Lorenzo Lebrija, an Episcopal priest and his partner of 19 years.   They live in Cathedral City with their dog, Lucy.

Cancel reply
← Previous Story:
Coalition’s Numbers GROW During the Pandemic
Next Story: →
Join me in prayer for the world