A Priest Born of Wartime Occupation: Li Tim-Oi of China

As part of Resolution 21-04 of our diocesan convention in 2021, we agreed to lift up the stories of Asians, to protect Asians from racist persecution, and to nurture understanding of Asian peoples and cultures through prayer and liturgy, among other ways. One of the great heroes of the Anglican Communion is Li Tim-Oi of China, the first woman to be ordained to the priesthood in the Anglican Communion. And yet, few people know her story. 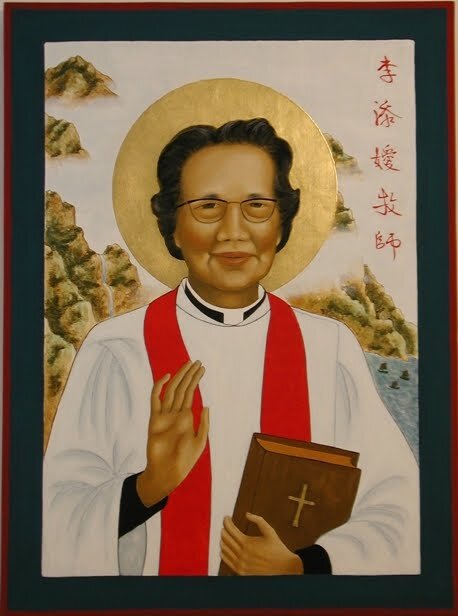 Li Tim-Oi was first ordained a deacon on Ascension Day in 1941. Her diocese was Macau, which was occupied by the Japanese during World War II. By 1944, the Anglican Church was reluctant to send male priests behind enemy lines into Macau, and so Li Tim-Oi conducted worship services, burials, weddings, and baptisms and arranged for food and clothing for the poorest in her diocese.

Recognizing her priestly gifts, Bishop Raymond Hall of Hong Kong ordained her as a priest to add sacramental duties to her very full plate, acknowledging that she was the only person willing to serve in the most dangerous of territories. He informed the Archbishop of Canterbury, William Temple, explaining that he was doing this out of dire need.

When the war ended, controversy erupted over the ordination of a woman to the priesthood, and to spare her bishop trouble, Li Tim-Oi agreed to surrender her priest’s license—but not her priestly orders. She continued to serve the church in China until the Communist Revolution, and for decades she was persecuted in reeducation camps for her Christian beliefs and practices.

Eventually, she was allowed to leave China, and she moved to Canada in 1983. By that time, the Anglican Church in Canada was ordaining women, and she joyfully resumed her priestly duties.

How can we lift up and celebrate this brave and groundbreaking priest who went where others feared to tread? She was as fearless as Archbishop Desmond Tutu and the Rev. Dr. Martin Luther King, Jr.—but without the news coverage.

Here are some thoughts. She is honored with a feast day on January 24 in the Book of Lesser Feasts and Fasts, where you will find a collect and readings to share during a Daily Office.

We can incorporate stories about her in our church newsletters, in sermons, in small group discussions, in Bible studies, and in youth group meetings. Here’s the longest online biography of her.

We can pray for the vocations of more Asians to both lay and ordained leadership positions in the Anglican Communion. And we can donate to the Li Tim-Oi Foundation, which was founded to fund the theological education and training of women in the Two-Thirds World.

Almighty God, who pours out your Spirit upon your sons and daughters: Grant that we, following the example of your servant Florence Li Tim-Oi, chosen priest in your church, may with faithfulness, patience, and tenacity proclaim your holy gospel to all the nations, through Jesus Christ our Lord, who lives and reigns with you and the Holy Spirit, one God, in glory everlasting. Amen.

2 replies to “A Priest Born of Wartime Occupation: Li Tim-Oi of China”

← Previous Story:
Faith to Go: The First Step of Today’s Journey
Next Story: →
Migration Missive: Knocking at the Door

Have you ever had one of those long, busy days when you fall into bed that night, stopping for what feels like the first time in 12 hours, and find yourself wondering, “What did I get done today?” It happens to many of us. The chaos of ordinary life takes the helm, and you find […]

Recently, the Episcopal Diocese of San Diego and the Commission on Ministry (COM) have revamped the discernment process for anyone inquiring about ordination as a call in their lives.   What is discernment, and why do we have a formal process?   Discernment is prayerful and intentional listening someone does to better understand what God might […]

Education for Ministry: Fertile ground to grow your faith “Will you continue in the apostles’ teaching and fellowship, in the breaking of bread, and in the prayers” (Baptismal Covenant, BCP 304). Every baptized Christian is called to ministry.  What is yours?  Education for Ministry (EfM) is a program of the School of Theology at the […]