Two California artists will exhibit work at the St. James by-the-Sea Episcopal Church Library/Gallery March 3 to March 11, produced during their time as 2017 Artists-in-Residence for the Marjorie and Joseph Rubenson Family Endowment for Art and Science at Volcan Mountain.  Their residencies were sponsored by the east San Diego county land preservation non-profit, Volcan Mountain Foundation and the Rubenson endowment.  Photographer Robert Treat and scientist/watercolorist Adrianne Smits spent weeks on the mountain, exploring and seeking inspiration from its great natural beauty.

The two-week exhibit in the old library will feature striking high-contrast watercolor paintings and hauntingly beautiful black and white photography.  It will be open to the public Saturdays and Sundays 11 a.m. to 4 p.m. Private showings will be available by appointment through the church office. 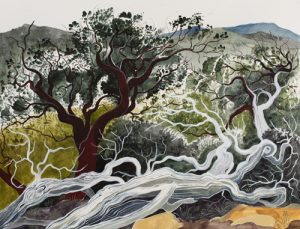 Adrianne Smits (artwork pictured) investigates complex natural systems both as a professional artist and as a scientist.  As a field ecologist, she often spends months at a time outdoors conducting scientific studies, allowing unique access to remote places that in turn inspire her paintings. “My approach to art practice derives both from the 19th century romantic landscape tradition and my training as an ecologist. Any theme pursued in a series of work stems originally from outdoor observational painting. Rather than work from photographs, I prefer to use only my watercolor sketches made on site to recall the memory and sensation of being at a particular place at a particular time.”

Robert Treat (artwork pictured) is a California artist whose paintings and photographs are exhibited and collected nationally. Primarily nature oriented, Robert’s photographs exhibit a strong structural awareness often verging into unconscious abstraction. These concerns of nature and structure serve for him a way of recovery to a primary sense of self, a quality that tends to get repressed by today’s modernity in general and media.  “Living in San Diego, I have found the close proximity of the Volcan Mountains to hold a wonderful mystique and quietness within its wildlands. In this project I’ve explored this mystery and solitude by photographing it regions that are normally not open to the public.” 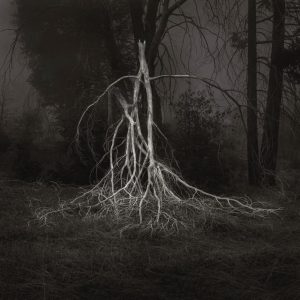 Rising to 5,700 feet, the Volcan Mountain range is the dominant scenic feature for a significant portion of San Diego’s backcountry and visible from the Pacific coastline 60 miles away.  It is one of the last relatively untouched areas of Southern California and the headwaters for four major watersheds including the San Dieguito and San Diego watersheds flowing to the Pacific Ocean just to the north and south of La Jolla.  Covering more than 50,000 acres, the Volcan Mountain range is an extremely pristine and biologically diverse area.  Over 30 different types of plant communities have been identified which provide habitat for a wide variety of wildlife species as well.  The relatively undisturbed nature of the mountain also provides a stronghold for some of San Diego’s rare plant and animal species.  Preliminary biological studies have recorded 45 species of mammals, over 150 birds, 36 reptiles and 12 amphibians.