On March 24, Episcopal and Anglican churches observe the Feast Day of Mons. Oscar A. Romero, the Roman Catholic Archbishop of San Salvador who was assassinated on March 24, 1980, while celebrating Mass.

Foundation Cristosal stands with El Salvador’s poor following in Romero’s footsteps through its human rights and community development work. In the days leading up to Romero’s Feast Day, we invite you to follow us on Facebook, where each day we’ll share quotes, and historical and contextual information about Romero’s life and his legacy in El Salvador.

Visit our website for prayers, bulletin inserts and liturgical resources.

Romero’s rise to power in the Catholic hierarchy coincided with a period of change in the Latin American churches, and following the Second Vatican Council (1962-1965) – a time when the church decided to break with the status quo and to stand with Latin America’s poor in their struggle for social justice. The decision to stand with the poor divided the clergy and the faithful, and at the time Romero was considered a conservative and his appointment to archbishop in 1977 did not please the liberation theology-minded clergy.

But Romero surprised them. As he explained it, serving as the bishop of Santiago de María, where he witnessed firsthand the suffering of El Salvador’s landless poor, changed his way of thinking. He also said he felt that increasing government violence against socially committed priests and laity, which undermined his trust in the good will of the authorities, led him to fear that both the church and religion were under attack. But it was the assassination of Jesuit Father Rutilio Grande, Romero’s longtime friend, on March 12, 1977, that brought a stinging denunciation from the archbishop, who suspended Mass in San Salvador’s churches the following Sunday, and he demanded the responsible parties be punished. They were not.

During the popular, weekly radio broadcast of his sermon, Romero read the names of those who’d been murdered, tortured and disappeared. The day prior to his assassination, he implored Salvadoran soldiers, as Christians, to obey the rule of God over the military dictatorship and stop carrying out its policies of repression and human rights violations.

Romero was assassinated in the chapel of the La Davina Providencia, the cancer hospital where he lived. He is buried in a crypt beneath the sanctuary in the Metropolitan Cathedral of San Salvador.

Please help us build our online audience by liking and sharing our Facebook page.

Almighty God, you called your servant Oscar Romero to be a voice for the voiceless poor, and to give his life as a seed of freedom and a sign of hope: Grant that, inspired by his sacrifice and the example of the martyrs of El Salvador, we may without fear or favor, witness to your Word who abides, your Word who is life, even Jesus Christ our Lord, to whom with you and the Holy Spirit, be praise and glory, now and forever. Amen. 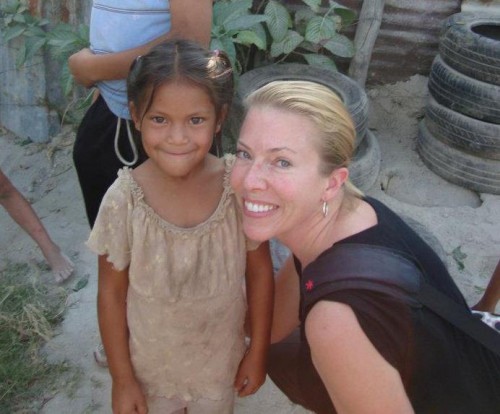 In the spring of 2006, El Salvador changed my life. I fell in love, and my heart was changed forever. In an attempt to run away from a broken heart, I organized a trip of volunteers to help build homes in a rural area of El Salvador. I returned home with a greater sense of mission, of purpose. I saw the world through different eyes. I returned with a deeper and more intimate relationship with Jesus and a knowledge of what it means to live out my baptismal covenant.

During a second trip to that beloved country, I met Noah Bullock and was introduced to Foundation Cristosal. I was impressed by the mission of Cristosal and the passion of those working within it. El Salvador is a country ravaged by years of civil war, hurricanes, floods and earthquakes. The small country called, “The Savior” has been brutalized by natural and man-made disasters The core of Foundation Cristosal’s mission is to build a bridge between North America and El Salvador. As a North American, Noah was working hard to help solidify programs to facilitate that mission. I became a friend of Cristosal.

Years have passed and life moved on. That old romance was left behind. I moved, changed jobs, met the man who is now my husband, and became a mother. Somewhere in that journey, I also walked away from the church. At the time, through hurt feelings and bruised ego, I thought nothing of it. But, every Sunday, there was a sense of, “I could be in church right now.” Church often crossed my mind, but I just didn’t go. I continued to read the Cristosal newsletter when it would arrive in my inbox. Good news of their work within communities was inspiring. Updates on Facebook of other parishes visiting El Salvador hit me with a twinge of jealousy. I missed El Salvador. I was being called.

Late last summer, I met with Rev. Canon Suzi Holding to discuss our diocesan work with El Salvador. There was indeed work to be done. I emailed Noah, now Executive Director of Foundation Cristosal to tell him that I was ready to get to work with Cristosal. He received this news happily. The following Sunday, I found myself sitting in a pew in St. Paul’s surrounded by my favorite bells and smells. I was home.

Last fall I was presented with the honor of being nominated as a candidate for the Board of Directors for Foundation Cristosal, to represent our diocese. This February I traveled to El Salvador to participate in the annual Foundation Cristosal Board of Directors meeting. Surrounded by the beauty the mountains in La Palma, a group of passionate and charismatic people, all dedicated to the good work of Cristosal, I renewed my Baptismal Covenant. In working with Cristosal, I am actively living out those vows. My relationship with Jesus is deepened and I am changed.

I invite you to join me. Join Cristosal to work together with our brothers and sisters in El Salvador. Currently, we are forming a Cristosal Base Community in San Diego. Cristosal Base Communities are organized groups of North Americans, compelled to support and accompany communities in El Salvador. This is an opportunity to continue to deepen our partnership with the Salvadoran people and engage in the work for human rights and the processes of spiritual and community development. The CBCs are regional groups of people who are passionate about Cristosal and El Salvador that work to coordinate their efforts, develop strategies and capacities for mission, and coordinate advocacy for Salvadoran issues and Cristosal’s work. I hope that will join this journey. We will be meeting regularly in San Diego and in collaboration with members in Los Angeles. For more information, please contact me at: alexandra.howard@me.com

What Does Foundation Cristosal Do?

Ten years ago, Cristosal was founded as a project of Archbishop Martín Barahona and former director, The Rev. Richard Bower to accompany the Episcopal Church of El Salvador in its mission to bring the “Good News of Jesus Christ to El Salvador.”

Since then, we have launched new programs to formalize our work for Community Development that implement a rights based approach to development. Our program places a strong emphasis on education, training and resource allocation as a means of empowering local leadership to push for structural changes to secure basic rights and a better quality of life.

At the core of Cristosal’s mission is the need to serve as a bridge between North America and Salvadoran communities and engage them in mutually transformational partnerships. Our Global Partner’s Program organizes transformational trips to El Salvador, connects a vast network of people in Canada, the United States, and El Salvador known as Cristosal Base Communities*, and act as an informational source about El,Salvador through our website, newsletter and alternative media.

In support of of founding partner, the Anglican/Episcopal Church of El Salvador, Cristosal makes an annual grant for Pastoral Development and Mission Expansion. Bishop Barahona allocates these funds strategically, and in many cases in coordination Cristosal’s other program, to promote the spiritual and theological formation of the communities as we continue to pursue our shared mission for peace, justice and reconciliation in El Salvador together.