Why Do We Give? 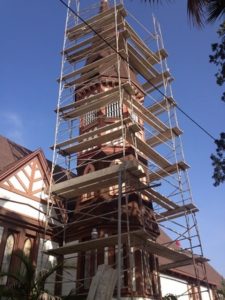 Every year churches strive to develop new ministries, expand existing programs or improve facilities to grow their programs. When the resources are not there to achieve these laudable goals, diocesan support comes into play.

Grants from the Episcopal Diocese of San Diego to congregations support and strengthen ministries and communities. The most effective Gospel work happens in local congregations, particularly those where there is a response to God’s call to mission, operational stability and financial accountability.

One church that’s following this call to mission must remain unnamed. That’s because it provides a safe haven for victims of domestic violence — right on church grounds. The congregation supported the housing program generously and the Diocese pitched in to ensure the continued operation of this important haven.

St. Matthew’s, National City is also becoming more welcoming. The congregation just wrapped up an intensive summer construction project: the renovation of the church steeple and new roof on the historic 150-year-old building.

“We are so happy to have a safe, beautiful sanctuary where we can welcome worshippers,” said Vangie Ban-eg, vestry member. “And we could not have done this without the Diocese.”

Christ the King, Alpine keeps its doors open through diocesan operational support. In recent years, vestry members have replanted the entire church grounds, painting the building and are well on their way toward rebuilding the congregation through local outreach.

These and many other stories of successful collaboration between congregations and the Diocese are evidence of the symbiotic relationship and its efficacy.

These stories show what it means to be a diocese and why our support matters. Ultimately our Mission Share Pledges give glory to God by equipping congregations to show forth his love not only with our lips but in our lives to those both within the Church and without. +