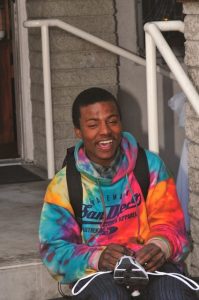 Love is all you need, or is it?

Sometimes you need a new pair of shoes and a clean pair of socks. Sometimes you need a haircut. On Maundy Thursday, March 24, the Diocese of San Diego hosted the second annual Maundy Thursday Footwashing at the Episcopal Church Center in Ocean Beach. Bishop Mathes washed feet alongside the Roman Catholic and Lutheran bishops. More than providing clean feet, volunteers provided personal care kits, vet services, haircuts, meals, massages, dental consults, medical attention and much more.
“Our message to those who attended was: ‘You are loved. You are cared for. You are a part of us. We are a part of you,’” said Canon Nancy Holland, director of the Episcopal Church Center in Ocean Beach.

Service contacts at a glance:

As one guest said, “I see Jesus in every face here.“ View photos and videos of the event on the diocesan Flickr account: flickr.com/photos/edsd/sets. Select “Footwashing 2013.” And next year, join us! Maundy Thursday is April 17, 2014. +