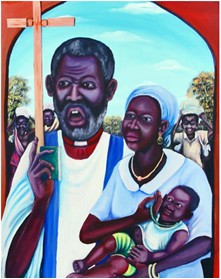 On Sunday, May 17 at 5 p.m., members of St. Luke’s and St. Paul’s Cathedral joined together to celebrate the Martyrs of Sudan at the weekly Choral Evensong service in the cathedral. One might wonder who these martyrs were and why this observance has been included in Holy Women, Holy Men, a book that commemorates the saints.

After Sudan achieved independence in the mid-1950s, the country descended into the First Sudanese Civil War from 1955-1972. During this time, the Islamicization of the government was on-going. The residents of north Sudan became predominately Muslim, although a small group of Christians with roots in the colonial era persevered. Southern Sudan, with the British in control, tended to be more Christian.

In 1983, the Second Civil War arose in the south over the government’s attempts to establish Islamic law. On May 16, 1983, a small number of Episcopal and Roman Catholic clerical and lay leaders declared they “would not abandon God as they knew him.” In the course of this civil war, over two million people were killed, with over half being members of the Episcopal Church of the Province of Sudan. Murders of church leaders, decimation of Christian villages, and destruction of churches, hospitals, and institutions associated with the church were rampant. During this time, some four million Sudanese were internally displaced and at least costo de la hormona de crecimiento humano a million were forced to flee their country entirely. Those who died became known as the Martyrs of Sudan, and May 16 is the day when the Episcopal Church commemorates them and we give thanks for their witness.

The collect for this day quotes Tertullian who said “the blood of the martyrs is the seed of the Church.” Though reliable statistics regarding religious membership are hard to come by, it is claimed that roughly eight percent of South Sudan was Christian in the 90s while today it is estimated that 60 percent are Christians, predominately Episcopal and Roman Catholic.

Some of the refugees from the second civil war were directed to San Diego. The then rector of St. Luke’s, North Park heard that refugees from Sudan were arriving in San Diego, and he went regularly to the airport to welcome them. Many of these refugees have been faithful members of St. Luke’s ever since, and today this multicultural congregation enriches our corporate life in the Diocese of San Diego.

The painting that accompanies this blog post is by Awer Bul, one of the Lost Boys of Sudan and is titled “Martyrs of Sudan.”