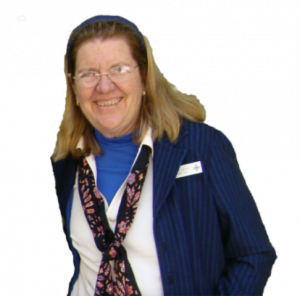 This summer we caught up with one of our donors to the diocesan capital campaign. Susan Stone Hayes attends St. Peter’s, Del Mar and has recently made a large pledge to the Build the Serving Church campaign, which will establish mentorships for clergy, provide loans and grants to congregations, strengthen the Bishop’s Appeal and undergird the work at the Episcopal Church Center in Ocean Beach by renovating facilities.

You have a long history in the Church. What does the Episcopal Church mean to you?

I’m a cradle Episcopalian and I love being an Episcopalian in California because it’s mildly counter-cultural here. I’m enough of a maverick that I like that idea. The diocese gives me a feeling of what the church can be in the community at large. I think I got to be quite an activist in my parish, but it is nice to embrace the larger vision that our diocese offers. I’m tickled to be a member of St. Peter’s and we are a fortunate parish with strong clergy and resources so it’s nice to be able to direct those resources toward the larger diocese. I’ve been on the board of Episcopal Community Services, St. Paul’s Senior Homes and Services, and the Episcopal Refugee Network, and all of those are examples of how the
larger church gets lived out in the community.

Why did you decide to make a major gift to the Build the Serving Church capital campaign?

I had a couple of clergy buddies that were very inspirational to me, Gloria Perkins, who was a deacon at St. Peter’s and my wonderful friend, Susan Astarita. I know, particularly for second career people, that I like the idea of mentoring. I think you can go to seminary and learn a lot of important theological points, but when the rubber meets the road, it helps to have someone help you with reality. Joseph Dirbas, associate rector at St. Peter’s, was an engineer. Gloria Perkins had a career in education. Susan Astarita, clergy member at St. Paul’s Cathedral, was in PR and marketing. To translate some of those skills into working skills for an ordained person it’s helpful to talk over those issues with
someone experienced.

You’ve visited the Episcopal Church Center in Ocean Beach. What do you find appealing there?

I remember when I first volunteered at Episcopal Community Services’ emergency assistance and Jonathan Winters, who was running it at the time, said the Episcopal Church was an absolute leader in social justice issues from the early 20th century. I like that we’re continuing that tradition. I think it’s an interesting idea to have a place where we can try out different plans and programs and churches can see how that operates in a small neighborhood.

Why do you think it’s important to financially support the campaign?

Because nothing ever happens unless you give. You can have all the lovely ideas in the world, but if you’re not willing to put money into it, they’re never going to happen. That’s one of the things that amazed me when I went to Washington National Cathedral. Every single thing that’s in there is there because someone had a passion for it and put money where her heart was.

Was there anything in particular that helped you make a substantial gift?

The thing that’s smart about this campaign is you’re able to make a pledge over three to five years so you don’t have to write one killer check right now. You can do it on a limited basis per year. Then your overall gift is pretty substantial.

We’ve all heard of paying it forward. Do you think that way with your philanthropy?

The only reason I’m in a position to do any of this is because my own husband made it possible. He was an old-fashioned Episcopalian and he also felt you need to put your money where your heart is. I’m the beneficiary of legacy gifts left to me so it seems only fair to extend that legacy to the people and institutions that I care about.

Is there anything that moved you and made you want to give to this campaign?

In a personal one-on-one conversation with me, Jim Mathes mentioned that he was making a substantial gift himself. It’s nice when the bishop is willing to put his money into the pot in a substantial way. Leading by example is the best way to lead. Again words without actions don’t get you far.

Cancel reply
← Previous Story:
What is Philanthropy?
Next Story: →
All Things Convention