For Crying Out Loud

If you are a parent or grandparent and have been in a public place with a small, noisy, unquiet-able child, then you know how welcoming a special space, designed for just such situations, would be. If the public place happens to be a worship service and you are at St. David’s Episcopal Church in the Bay Park/Clairemont neighborhood of San Diego, then the newly redesigned Family Room is where you can retreat to comfort your little one, but still be part of the service.

When St. David’s building committee met with local architect, Rob Wellington Quigley, in 1995 to plan the new building, to replace one that had been destroyed by an arsonist, they were adamant that such a room be included. St. David’s prides itself in being a child-friendly church – one that doesn’t mind when children add their voices to the service. They didn’t want it in the back, separated from the community. They wanted it visible and accessible. And so it is. However, like many building projects, money to adequately furnish the space ran thin. Over the years, loving donations and rummage sale castoffs became the design aesthetic. 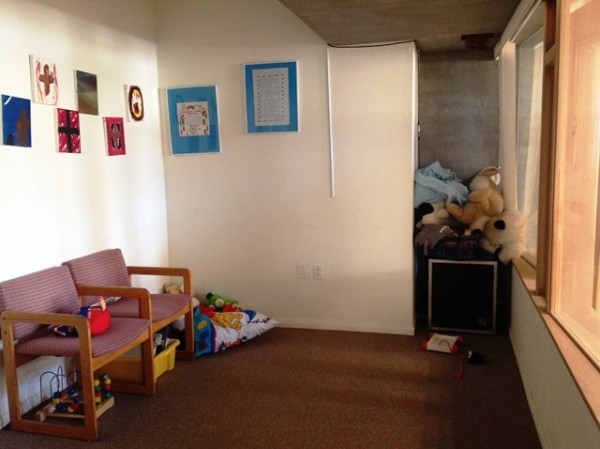 Enter Anne Kellett, a member of the congregation and a loving grandmother; she has brought her two grandchildren to church every Sunday since they were born.

“Most of the time they’ve been easy to have in church and the congregation loves them but sometimes two- and three-year-olds need to be removed so not to disturb others,” said Ms. Kellett. “So off to the cry room, as it was called, we would go. While it was great to still feel part of the service, the furnishings were dismal. There was no toy storage other than a big basket. No surface to color or do puzzles on other than the floor. I had to constantly remind the kids not to bang on the window sills or play with the vertical blinds. I began to dread going there. I wondered if new visitors to the church might feel the same way.”

After careful thought, Ms. Kellett presented a new plan to the church’s vestry for the space. The mission for the redesign was first to welcome young families, visitors with children and parishioners with grandchildren. Second it needed to nourish young children with a pleasant place where they could be who they are — an age-appropriate place. Third it should continue to include caregivers and children in the worship by not being cut-off by sound or the worry of intrusion. It needed to blend in with the look of the sanctuary and to be a fun place to be on the inside. The vestry agreed!

Anne chose natural wood tones for the new furniture and a soft gray color palette for the walls and upholstery to coordinate with the architect’s choice of concrete and wood in the larger worship space. Solar blinds replaced the noisy vertical ones. The controls are out of reach of little hands and, when down as needed for privacy, you can still see out but not see in. The sills were covered in cork so trucks can now drive quietly by. 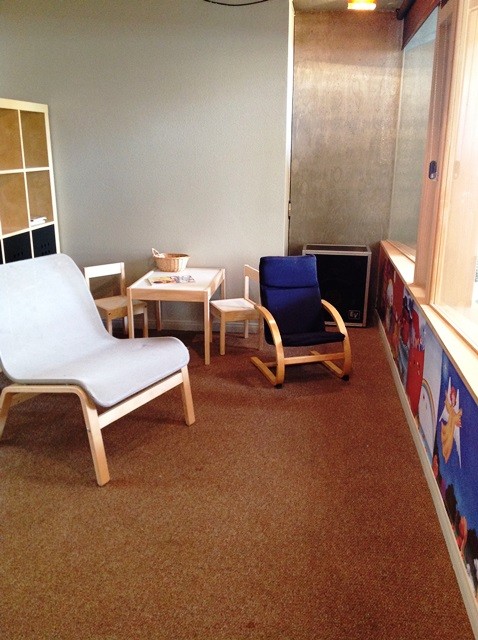 But the best part of the new space is the bible story mural designed by Anne and graphic designer Melinda Murdock.

“We took (with permission) images from a popular kid’s bible and photoshopped them into a mural that measures 22 inches high and 18 feet long,” said Ms. Murdock. “Wallpaper installer Mary Rosi pasted the vinyl print onto the wall below the windows. It makes such a difference to the space. The kids love pointing out its features.”

When Anne posted the project on her Facebook page someone made the comment, “It looks comforting and welcoming aside from being a great design.” Mission accomplished! 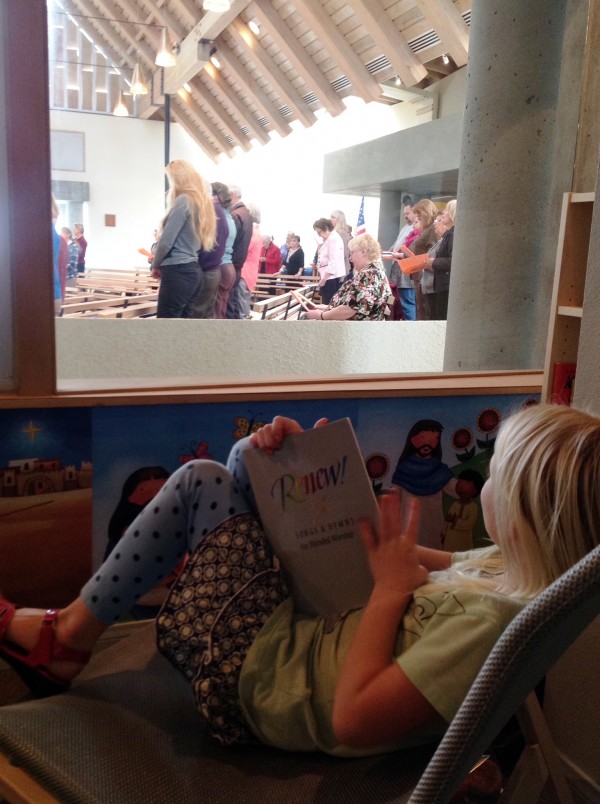