A Different Kind of Campus Ministry 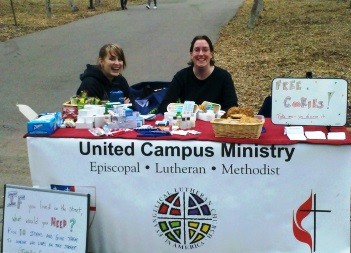 It’s been a busy year for campus ministry, and we’ve undergone significant transformation.

This fall, after watching several students graduate the previous two years, we knew our regular Wednesday night group would be smaller than usual, with only a handful of regular attendees. And despite a deliberate push for increased visibility on campus—new signage, business cards, and a website—our willingness to welcome students wasn’t enough.

Students walked by our table on library walk and avoided eye contact or pretended not to hear us say “hello.” Few people asked us questions or inquired about the group, and only a few took business cards or wanted to know about worship. Occasionally, a good soul would stop and chat but most of them were affiliated with other religious groups on campus. Few new faces came to our faith and fellowship gatherings on Wednesday nights. It seemed not a single student could be found wandering campus hoping to stumble across a group of Episcopalians.

So we discerned, we prayed, we talked with other groups, we investigated other models, and we got sunburned sitting on UCSD’s library walk trying to understand what we were seeing and what we were called to do.

Finally, when we were exhausted and ready to give up, God did something amazing.

Beginning in January, we decided to hand out free cookies as a way to engage students in a small act of kindness. I expected it to be like putting out sugar for ants. But I was wrong. No one flocked to our table for cookies. Those first couple of weeks saw us give away an average of two dozen cookies in four hours. Students were skeptical. They would see the sign for cookies, then the words “United Campus Ministry—Episcopal, Lutheran, Methodist” and you could watch them get their hopes up only to be discouraged we were a religious group. It was hard to fathom: since when does a college student turn down free food?

But they would ask, “Are these really free? Do I have to sign up for something? What happens if I take one? Why are you giving away free cookies?” And THAT, all those questions, was how God led them to us. At first I was discouraged to hear their skepticism, but they’re good questions and we have good answers.

“Yes, they’re really free. You don’t have to sign up for anything. If you take one you might enjoy it. We’re giving them away because we represent a church of good-hearted folks who want students to know they’re not alone and we believe God loves them all, no matter what.”

And when students heard those answers, they responded. They smiled. They knew we were safe. And whether they agreed with us politically, theologically, or spiritually, they knew a good thing when they saw it. They started to come back for more every week. Students would see us, recognize us, and make a bee line for the table. They started calling me “Free Cookie Guy,” the best nickname I’ve ever had. In just a few weeks we were averaging 6-7 dozen cookies every three hours. We were seeing some of the same students on a regular basis, and even though many couldn’t attend our Wednesday evening gatherings we learned their names and started to build relationships.

God’s next move was inspired by Diocesan Convention (yes, really). While attending the convention, I was helping one of our student leaders with an activity she was coordinating, assembling blessing bags. Probably you’ve seen a similar activity, which collects toiletries and/or food stuffs to give to those who live on the street. It involves a table full of supplies and allows participants to put items in a bag which they take and give to someone they find.

A similar activity was an obvious choice for our tabling efforts on campus. We had regular customers for free cookies every week, it only takes minutes to complete a bag, and it allowed us to serve the homeless while empowering students to do some good work.

The Good Samaritan Outreach Committee liked the idea and helped us with startup funds so we could gather the first wave of supplies. After that, as you may have noticed in the narthex, we asked the congregation to pitch in by donating supplies, too. We set up our table with cookies, cards and signs, but added all the toiletries and foodstuffs, too. Now when students stopped for a free cookie they were invited to participate in the activity with a sign that read, “If you lived on the street, what would you need?”

The blessing bags were a huge hit and can’t be overstated. Students discovered they could do real good in just a few minutes, completely for free—they just needed to listen to their heart and be willing to use their hands and feet. Everything else was provided. It was a common scenario where a student would learn of the activity, assemble a bag, and then be a little worried about the next part: handing the goods to someone who lives on the street. But when students returned the following week that fear was replaced by a fire you could see in their eyes. Yes, they would enjoy a free cookie but they came back to put together another bag. Some students came to know the people they were helping. And they returned every week to keep them supplied. The fire spilled out when they spoke. Some actual quotes from college students:

“You guys are awesome, I love seeing you here!”

“This is a great idea, thank you for doing this!”

“I look forward to Wednesdays!”

“This [blessing bag activity] is the best thing on library walk!”

It is a remarkable gift to watch a young person’s heart grow a little bigger and get a little stronger. But in just a few short months we saw it happen for several brand new faces who would soon become like old friends: Keira, Suzanna, Andre, Eric, Jermaine, Corey, Eva, Will, Dillon, David, Kiki, and Mike. And while those students can’t attend regular Wednesday night gatherings they worked with us to serve others every week.

In retrospect, I can’t blame students for being skeptical. In a world where a free cookie gets suspicious looks, it’s even harder to accept the Grace of God. But God is working in these young people, even if it’s not the way we’re used to seeing, and we are finding ways to mobilize it.

So this is a different kind of campus ministry. And despite spending most of my time on college campuses the past thirteen years, I’ve never seen one like it before. Our strength is not based on the number of people who show up for food, faith and fellowship on Wednesday nights. Our strength comes from the will to serve others in our community.

And I believe it is the manifestation of goodwill from Good Samaritans. After all, it was Good Sam volunteers who baked over 2,500 cookies, donated over 500 bottles of water and hundreds of supplies so students could assemble 150+ blessing bags.

Our diocese’s efforts are working wonders. I’ve seen them. We’re still taking donations for the blessing bags for next year and we will still need cookie bakers. But I hope you find a few minutes to reflect on the good work you’ve already accomplished and pray for the seeds that were planted.

Thanks for a great year. We are excited about some new ideas for the fall and are looking forward to meeting a new crop of God’s servants.

Cancel reply
← Previous Story:
Support Our Seafarers
Next Story: →
A Side of Community with Your Drink