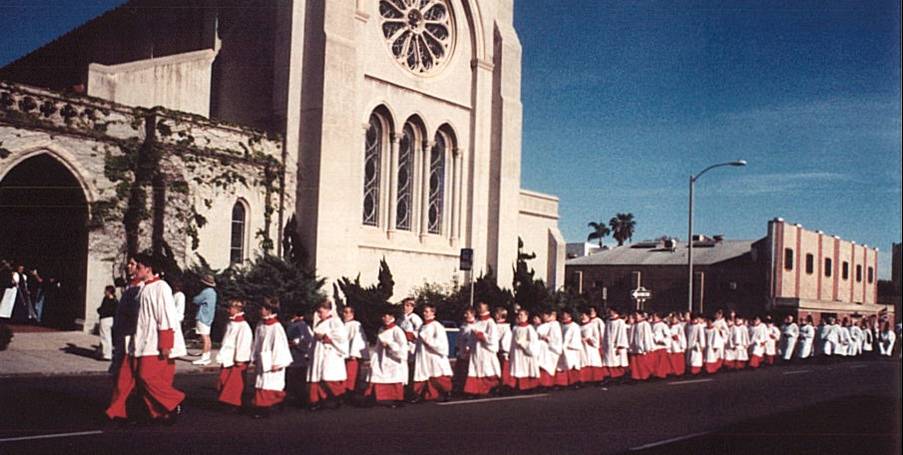 Shipwrecked off the coast of Point Loma, Episcopal Bishop William Ingraham Kip, a patrician New Englander, and his wife were entertained by the Bandini family, whose house still stands in Old Town San Diego. On January 22, 1854, the bishop celebrated his first Eucharist in California at the courthouse in Old Town.

As the area developed, Episcopal churches emerged out of new communities until a separate diocese was formed. The Rt. Rev. Robert Wolterstorff was consecrated as the first bishop of the Diocese of San Diego in 1974. The newly formed diocese then had 37 congregations and nearly 20,000 members.

The Rt. Rev. Brinkley Morton from Alabama was elected and consecrated second bishop of San Diego in 1982. He focused on developing seven new congregations and he helped expand the services of already existing Episcopal Community Services, which still continues to help people in need today. 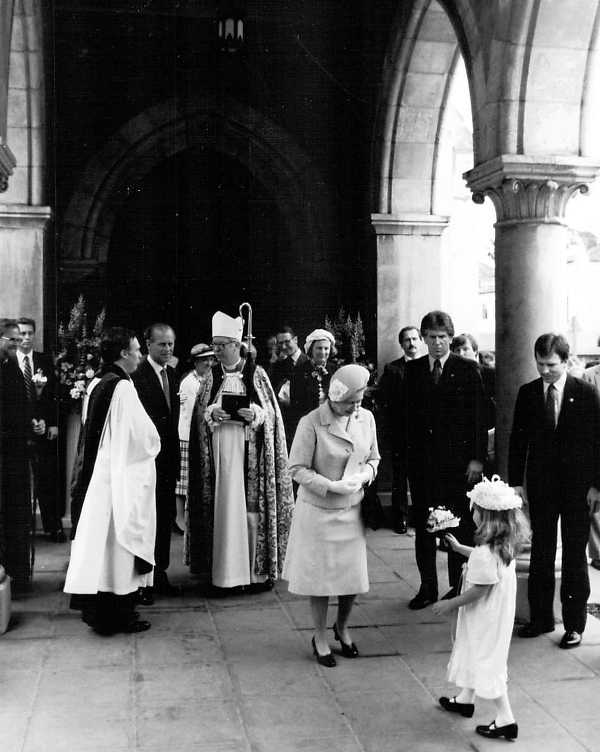 Since its inception, St. Paul’s Cathedral has been a center of ministry, but it wasn’t until 1985 that it was named our cathedral. In 1983 Queen Elizabeth II of England and her husband Prince Phillip visited St. Paul’s, marking a high point for our diocese.

The Rt. Rev. Gethin Hughes, our third diocesan bishop, was elected and consecrated in 1992. Bishop Hughes spent his episcopate increasing mission and ministry in this region. He also led a fundraising campaign for new church buildings. By 1999, the diocese had 52 congregations and 26,000 members.

The Rt. Rev. James R. Mathes was ordained and consecrated as the fourth Bishop of San Diego in 2005. His ministry focused on developing vibrant congregations that are missional centers for the wider community, and teaching the faith. He resigned in 2017 to accept a position as the associate dean of students at Virginia Theological Seminary.

The Rt. Rev. Dr. Susan Brown Snook was ordained and consecrated as the fifth Bishop of San Diego in 2019. Her ministry is focused on evangelism and church growth. Bishop Susan is focused on bringing Jesus Christ to the people of San Diego and the world with courageous love.

The Episcopal Diocese of San Diego today consists of 44 churches and over 20,000 members across San Diego County, Imperial County, southern Riverside County and Yuma County, Arizona. This diocese is a part of the greater Episcopal Church which has 110 dioceses in 16 nations and is a member province of the worldwide Anglican Communion.

Interested in learning more? Connect with the diocesan historiographer:
John Will

The archives are housed in the Office of the Bishop; they are an invaluable resource for members of the Episcopal Church and for historians. They hold a rich collection of documents related to our history and the history of many of our congregations.

Diocesan Historian John Will will be able to help you research your parish history or to set up a parish archive.

We welcome your historical files and stories as we create a new library for all to enjoy. To share your artifacts and/or stories, contact Chris Tumilty.

September 2014: An Interview with the Rev. Canon Wayne and Mrs. Katherine Sanders