Dean and Dona Fitzgerald (pictured above) usually worship at a Baptist Church. But one Sunday not long ago they were among those celebrating the Lord’s Day at St. Luke’s, San Diego – North Park. Some of those in the pews were South Sudanese Americans who over the years or even recently had moved to southern California, seeking new life and refuge from war-torn countries. The congregation also included Congolese refugees, as well as some who have attended the parish for a long time.

Dona described the welcome at St. Luke’s as “warm and friendly. It was wonderful to worship with such a varied congregation. The church was crowded with children who really seemed to feel at home in the place.” Her words echo an invitation on the parish website: “We dream to be a place where all people can enter into uncomfortable and brave spaces with others different from themselves – different races, ethnicities, classes, creeds, sexual orientations and gender identities – and find their perspectives and hearts transformed.” Sponsored as missionaries by the Southern Baptist Convention, Dean, a surgeon, and Dona, a registered nurse, had served many years among people who had experienced danger, forced migration and other unsettling forces in their lives.

They spent 11 years in Jordan, followed by 29 years in Gaza.

The Rev. Colin Mathewson and his wife, the Rev. Laurel Mathewson, provide pastoral care and leadership at St. Luke’s. Colin spoke of “helping one of our immigrant families find housing. They are a family of eight now living in two rooms in University Heights. The father is a janitor at a hotel. After the service last Sunday several parishioners and I gathered with the family in the church. We hoped to help them find a place to live, but we also felt it was important just to be with them during this hard time.” 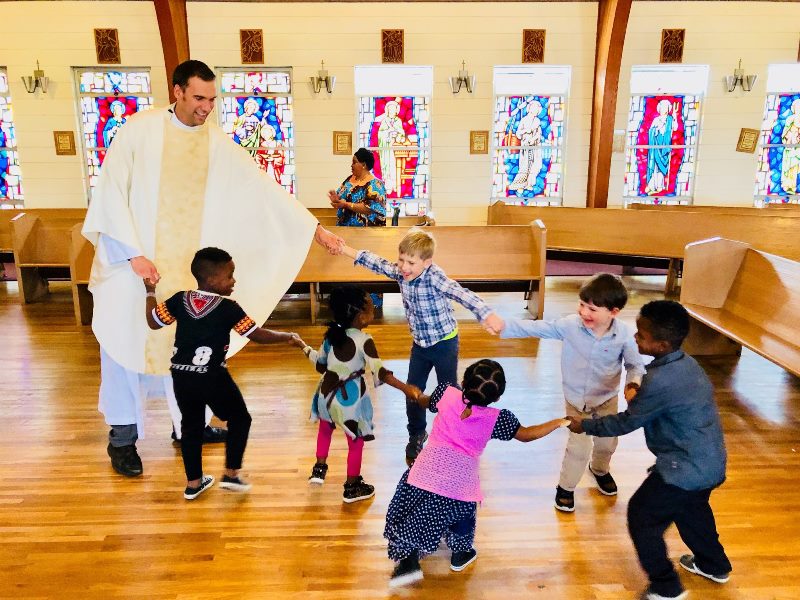 The first immigrants from South Sudan arrived in San Diego decades ago. The children of that group are now in high school and college. They chose St. Luke’s because their church background was Anglican. Other Sudanese continue to arrive. A more recent refugee group is the Congolese. There are many cultural differences as well as a difference in language between these two groups. The Sudanese now welcome the Congolese into the parish, just as they experienced years ago. About 20% of the congregation live in the neighborhood. A great deal of effort is put forth at St. Luke’s to be inclusive of all. While Sunday services are primarily in English from the Book of Common Prayer, the announcements and the gospel reading are in Swahili and Arabic as well. While the prayer book liturgy is of the land where the immigrant parishioners now live, the hymns are native to the lands where they once lived. The music is joyous. English translations of the words are printed in a leaflet for worshipers and some talented parishioners demonstrate that they know how to make native drums do what those drums were intended to do.

The North Park neighborhood developed as part of a post-World War I expansion. In 1923 several members of All Saints’, San Diego organized an Episcopal Sunday school. It met for the first time on St. Luke’s Day in 1923. The 1925 journal of the Diocese of Los Angeles lists St. Luke’s as a mission congregation of All Saints’. St. Luke’s became a parish in 1939. The inclusive ministry now celebrated there is the result of a cooperative effort by St. Luke’s, St. Paul’s Cathedral and the Diocese of San Diego. The Mathewsons came to St. Luke’s after serving as curates at the Cathedral. A representative of the North Park parish is a member of the Cathedral chapter (vestry, or governing body). 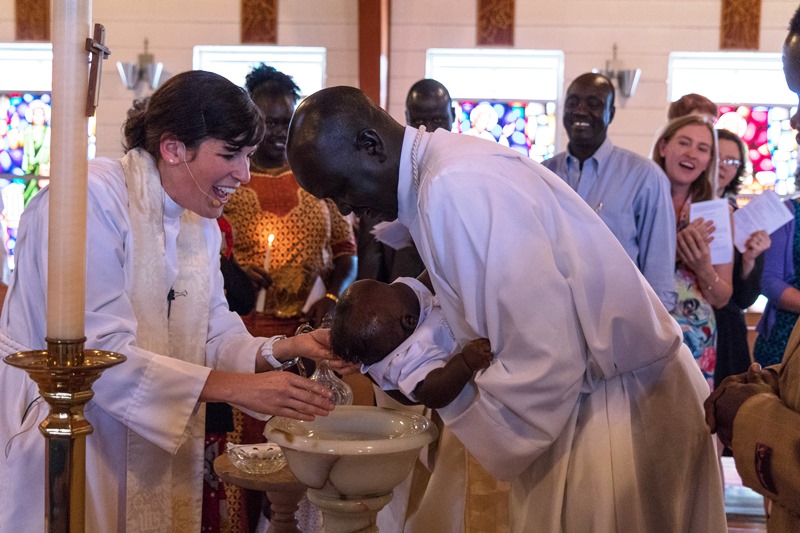 Cathedral parishioners participate at St. Luke’s in various ways. Bob Carney, for example, assists in the children’s ministry on the third Sunday of each month. “Since I was a public school teacher for 30 years, creating and presenting my lessons is left for me to decide. I have been a volunteer for more than a year. I know the children and their parents. Language is often a challenge because some children arrive never having been exposed to English. This challenge does not linger, however, as the students learn English very quickly.” Bob describes three levels of learning for the children: pre-school, lower primary, and upper primary groups. Dawn Stary is the children and family minister for the parish.

The St. Luke’s church building is easy to locate on Thirtieth Street just south of University Avenue. But those living near the parish know there is more to be seen than the building. Offices and activity rooms adjacent to the church are places of meeting for community groups as well as a shelter for those who are homeless. Neighbors are also aware of the large open area just north of the church building. It is an urban farm run by City Heights high school students. Youth FarmWorks is a paid internship program sponsored by the International Rescue Committee (IRC). The students learn how to plant, grow, harvest and sell vegetables. They sell produce at the North Park farmer’s market on Thursday afternoons or in front of the farm on Saturday mornings.

Another IRC program will move to St. Luke’s as soon as funds are raised to upgrade its commercial kitchen. This will provide a paid hands-on work readiness program for low-literacy refugee women to gain English communication skills and formal work experience. There are only a few other such programs in San Diego County. These programs are two of the results of an ongoing partnership between the IRC, St. Luke’s and the North Park community. Contributions to support the ministry are welcome – be in touch with Colin Mathewson.

The laughter and happy voices of children at St. Luke’s call attention to a new play area dedicated last April. According to Laurel Mathewson it is a project begun by a Christian group known as the Genesis Church that shares worship space on Sundays. Episcopal services take place at 7:45 a.m. and 11:15 a.m. The Genesis Church worships at 9:30 a.m. The Episcopal congregation’s joining in supporting the new play area is a symbol of the common concern both congregations have for the people living east of Balboa Park.

Those members of All Saints’ parish who attended that Sunday School class in 1923 had no idea, of course, that they were taking the initial steps that would lead to today’s ministry at St. Luke’s. And those in ministry at St. Luke’s now have no idea of what might result in future years because of their current activities. As Dean Fitzgerald put it, “Ministry is a way of offering thanksgiving for the present as well as an expression of hope for days to come.” +

Contributed by the Rev. Richard Anderson of St. Paul’s Cathedral.

Michael Curry Shares God’s Love at the Royal Wedding Well, Are You Going to Close Us?

Communications, Outreach, Where SunDays Are Better Than Others, Worship & Formation

A Pastoral Letter from the Episcopal Bishops in California